As promised – a few thoughts on StartupWeekend now that I’ve had a chance to both get over my disappointment that we didn’t release anything on Monday morning and more importantly time to think about what worked and what didn’t work last weekend. There seems to be no lack of opinion on the subject (see the comments to the “Success and Failure” post on the StartupWeekend website and the mass of comments left on the TechCrunch article about the weekend or just do a Google search for StartupWeekend).

Overall, it was a great experience. We had an outstanding group of founders from a broad cross-section of Denver/Boulder technology companies. Andrew did a great job of facilitating the weekend without being too heavy handed (although see below for some ideas on where more structure might have benefitted the ultimate goal of the project). A lot of the people involved have posted on their blogs or elsewhere online that as a “Social Experiment” StartupWeekend was a success. I think what they mean is that we had a fun time, everyone contributed, and no-one wanted to kill anyone at the end of the weekend (which says something given that many people were operating on only a few hours sleep over the 50+ hours that the project was active). That said, if StartupWeekend is only a social experiment the concept will have pretty limited value (and a limited life – it’s fun to do once, but to make it a regular occurrence, there needs to be the realistic expectation that a ‘product’ will actually be released). Don’t get me wrong – I loved the ‘social experiment’ side of the weekend, but the goal of the project was to produce something in the period of time we were together (and capitalize on the buzz generated by the excitement around the process for the benefit of the company that was created). The journey was great, but we actually needed to get somewhere. I know Andrew wants to replicate the Boulder StartupWeekend elsewhere around the country – I’d love to see this happen and think what we learned last weekend will help make the effort in other cities more productive and ultimately more successful.

That said, VoSnap will launch – and soon. The project did live beyond the weekend and, after everyone got some sleep and returned to their Monday-Friday lives, there was a great deal of interest by the group in continuing with the project. Not just to the first launch, but beyond that (and potentially building a business around the project). When it’s up and working I’ll put up a note and link to the working site. It definitely says something both about the weekend and the group of people who participated that the project will live on beyond Monday. It’s emblematic of why the weekend was such a great experience.

Here are some summary thoughts on what worked, what didn’t work and what we might do differently when we do this again:

What didn’t work/what to do differently:

I’ll end with a few pictures to give you a sense of the environment we were working in (two views of the main room and one of a stand-up product meeting). 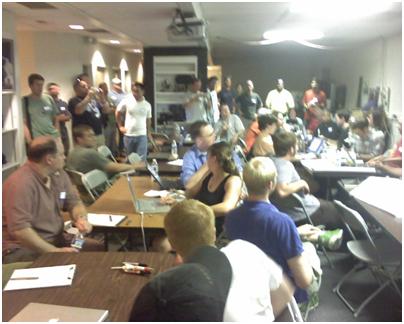 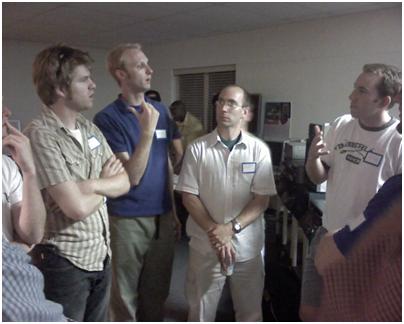