The Kauffman Foundation published an article last week that my New Builders co-author, Elizabeth MacBride, and I wrote about the inspiration for writing the book and – related – about how our systems of finance and support need to evolve to meet the needs of today’s entrepreneurs. One of our biggest inspirations and favorite New Builders is Danaris Mazara of Sweet Grace Heavenly Cakes. Sweet Grace was born in 2008, as the Great Recession ripped through the United States, particularly affecting working-class communities like Lawrence, Massachusetts where Danaris lives. She can identify the exact minute the bakery was born. She had $37 in food stamps to her name. “What are you going to do with $37 in food stamps?” Danaris asked herself. Danaris believes in God, and at that moment a divinely inspired thought came into her head: “Make flan.” From that beginning, her business was born. 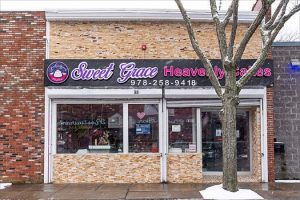 Based on our research and the conversations we had in the course of writing our book, we believe there are countless potential Denarises out there. We need to find them and support them.

The demographic shift is due to the growing diversity of our country, but also reflects some special conditions that make startup life and small business ownership especially appealing to women and people of color. Given the economic needs driving them, we’re seeing a surge in business starts post-pandemic.

Lacking the entwined systems of finance and mentorship that supported past generations of (white, male) entrepreneurs and that still over-index in support of a tiny subset of businesses in the tech world, today’s entrepreneurs face almost insurmountable obstacles. Entrepreneurship in America has been on a slow decline for the past 40 years but very few people in the mainstream notice this trend.

But it is the decline in the broader world of entrepreneurship that is a crack in America’s identity as a land of opportunity and innovation. Innovation doesn’t come soley from white men educated at Ivy League schools. Innovation comes from giving a broad swathe of people the opportunity to create businesses that drive economic growth.

We believe the fastest lever to give people like Danaris the wherewithal to start companies is a well-designed system of finance that provides capital, as well as the emotional and social support entrepreneurs need. According to Kauffman Foundation research, beyond the 1% of startups receiving venture capital financing, only about 17% take any outside financing at all. The key is getting the same level of robust financing to the remaining 83%.

There are four promising directions in finance innovation that would help the vast majority of entrepreneurs who aren’t getting funding. There are many more to consider, but these would be a good starting point.

The New Builders is in many ways a call for people who now control capital in our country to do what they do best: innovate new financial products to create and serve a new market. We should be asking ourselves how we can adapt to the new generation of people who are starting businesses today.

There are hopeful signs. While the most powerful members of the capital class can seem short-term and indeed are often deeply motivated by profit, they want to be ahead of the game. The future of the economy clearly lies with New Builders, who are more diverse in terms of their background, but just as capable and lofty in their dreams as any generation of entrepreneurs before them. I have faith that we’ll find new and creative ways to help them succeed.