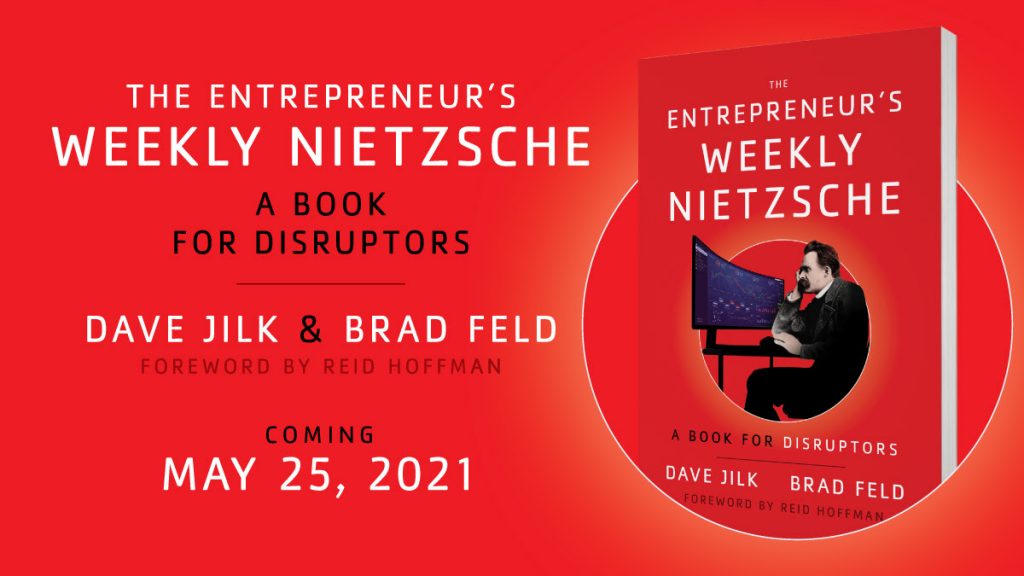 Nietzsche has so many famous quotes it’s sometimes hard to choose just one (most have heard that which doesn’t kill you makes you stronger although I suppose few realize that it was the German philosopher who first penned it). My favorite, perhaps, is: there are no beautiful surfaces without a terrible depth. I like it in particular because in many ways it describes Nietzsche himself. His writing is often beautiful, but with a depth that sometimes takes time to fully recognize.

In their new book, The Entrepreneur’s Weekly Nietzsche: A Book for Disruptors, Brad Feld and David Jilk pick out some of their favorite Nietzsche quotes and form chapters around business lessons from them. It’s a brilliant construction and one that adds context and meaning to Nietzsche and his writing. You’ll recognize many of the contributors to the book – Reid Hoffman wrote the introduction (I didn’t realize that Reid studied philosophy before turning to technology as a career), and many entrepreneurs contributed chapters (I wrote one as well, in fact).

There are many lessons to be learned from the last year – of the importance of connections to those around us; of how fragile our economy is – especially in certain sectors; about what’s really important. One of the most important to me was the power of slowing down. I’ve always known this – and strove to create space in my life to do it (often failing). But Covid forced it in ways that were unexpected. Especially from this perspective, the timing of The Entrepreneur’s Weekly Nietzsche is perfect. I’ve had a pre-release copy for a few weeks now and it’s how I start my day: quietly contemplating a Nietzsche quote and considering its meaning for my personal and work life. Thank you to Brad and David for this gift.

I hope you’ll consider buying the book and trying a similar routine. Nietzsche isn’t a philosopher to be devoured. Rather, his writing is meant to be contemplated and considered. The Entrepreneur’s Weekly Nietzsche is a wonderful, guided way to do just that.

You can purchase the book on Amazon and other sites. The book’s website with more information can be found here.