The post below was written by a friend who wanted to share it but asked to stay anonymous (so as not to call her mom out). I think it’s really powerful, I hope do you as well. The strain this political season is putting on families is real. November 3rd will be here soon, for better or worse… 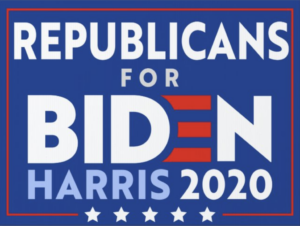 I’m very close to my mother and I have deep respect for her. However, there’s been a nagging distance between us since Donald Trump ran for president four years ago.

My mother has been a loyal Republican for 47 years. I’m an Independent. We often voted differently, but we could almost always find common ground because we share many of the same values, most of which she instilled in me.

She raised me to be an independent woman and to believe that I could do everything that my brother could do. She taught me to be compassionate, to respect all races and religions, and to always take the high road. Whenever I faced conflict and wanted to lash out, she told me to “kill them with kindness.”

When Donald Trump ran for president in 2016, I was sure she would cross party lines to stand for the values that she taught me to believe in. To my surprise, she did not.

Then, the infamous “Grab her by the” Access Hollywood tape surfaced. I was certain that this would change my mother’s mind. How could my mother, a woman who raised me to be a strong, independent woman, support a man who so viciously objectified women? Yet, she stood by him. She admitted that his behavior was disheartening, but excused it because he was a “man of a different generation.”

I mustered the courage to tell her how disappointing that was for me to hear. I revealed that when I was 16, I overheard my bosses engaging in similar behavior as we saw from Trump in that video. As a result, it took me ten years to overcome my fear of being alone in a room with any of my male colleagues or superiors. It wasn’t until I heard that tape that I felt that same feeling of fear and sadness that had taken me ten years to overcome. To hear this from the man who may be the next president of the United States and to know that my own mother was supporting him was hard to swallow.

She cried and said that she was so sorry that I had that experience. She then shared a story about how her father’s friend brutally sexually harassed her in front of my grandfather and my father shortly after they were first married. Neither my father nor my grandfather stood up for her. That, as you might imagine, was deeply hurtful to her, but she said that she was able to forgive them because they, like Trump, were good men who simply came of age in a different era.

Shortly before the election, she called to let me know that she had made her final decision to vote for Trump and that, while she was ashamed to admit it, she realized that she “was not ready for a female president.”  In that moment, I realized that the woman who had raised me to believe that I could do anything my brother could do did not actually believe that to be true. While my instinct was to lash out, I swallowed my tears and thanked her for the tremendous amount of courage it must have taken for her to make that call.

In the four years since then, I had many more urges to lash out. I always stopped myself because my relationship with my mother is more important to me than winning a political argument. I even started to appreciate the opportunity to be so close to someone with political views so different than my own, and to admire her ability to stand by her convictions. There was this one moment when we were sitting with eight other people who just assumed that she had voted for Hillary Clinton. This woman started going on and on about how she just couldn’t understand how people could be so ignorant and selfish to even consider casting a vote for Trump. I watched my mother squirm in her seat for a few minutes until, finally, she took a deep breath and said, “I just want you to know that I voted for Trump and I don’t believe I did so for ignorant or selfish reasons.” The woman apologized, and my mother proceeded to calmly and respectfully explain why she had voted for Trump. We all emerged from that conversation with greater compassion and understanding for both sides of the aisle, and I was deeply proud of my mother. I watched her interact with people with opposing political views on many occasions without ever muttering a hateful word. I’m proud to say that we never shared a hateful word about each other, until the first presidential debate of 2020.

As I watched the debate, I thought about how horrified my mother would be if her four-year-old grandson emulated the behavior of our president. I composed an angry email to ask her how she could possibly be so stubborn and stupid, and to tell her that I would never forgive her if she voted for him. Because I’ve learned to never send an email when I am below the line, I decided against sending it.

The next morning, she called me to ask for my advice. She had spent her morning working out with her 75-year-old trainer, who is recovering from cancer, at a gym where masks are required by state mandate. She asked a woman who was not wearing a mask if she would consider complying with the law, and the woman aggressively lashed out at my mother, stating that it was her gym, too, and that my mother had no right to police her. It spiraled into a dramatic 45-minute argument that involved the manager and several gym patrons. She called me to run through all of the facts and content of the argument, and I told her that none of that mattered because the woman was reacting emotionally rather than rationally. I gave her some tips on how to relate emotionally without evoking defensive behavior and then I said,

“Mom, I am afraid we will all continue to experience more incidents like this if we elect a president who promotes bullying and aggression.”

“My daughter said something to me yesterday. A vote for Donald Trump is promoting the example that a person who behaves and conducts themselves as he does can rise to be the most powerful leader in the world. I have been a Republican for 47 years, but I will be casting my vote for a kinder, gentler candidate.”

As I reflect on this five-year journey, I am struck by how much I have learned and how applicable these lessons are to all aspects of my life. Because, as entrepreneurs and VCs, we are in the business of changing behavior and disrupting the status quo, I thought it might be helpful to share some of the tips I learned along the way.

People respond poorly to shame. The more self-righteous I became, the more she retreated.

Understand your own patterns and the patterns of those around you. I’ve been on a parallel path to become more self-aware to deepen my knowledge of Conscious Leadership. This paid dividends to my business and to my conversations with my mother. The Enneagram and the Four Tendencies have also been particularly helpful.

Build close relationships with people with opposing viewpoints. This journey with my mother has helped me approach all sorts of opposing viewpoints with more compassion and empathy, and it has led to much more productive conversations.

The reason people give is rarely the real reason for their decision. Over the past five years, it became increasingly obvious that my mother’s behavior was driven by conscious and unconscious gender bias, and 65 years of programming herself to believe that the path to a virtuous life was to be a good Republican.

Uncovering the most important behavior driver is the key to driving change. At the end of the day, I believe my mother made this decision for me. Above all else, she is a mother who would do anything for her children. I think our journey would have been much shorter if I would have recognized and tapped into that from the beginning.

Never send an email in a state of anger. I am not sure why the mask incident was the straw that broke the camel’s back, but I am certain that had I sent that below-the-line email to ask her how she could be so stupid and stubborn to support Donald Trump, she would have cast her vote for Donald Trump.

During COVID, I’ve been asking myself what I want to be able to say about how I spent my time during this pandemic. I think I finally have an answer. I want to learn how to better resolve conflicts and drive change without evoking hatred and defensive behavior from the other side. I learned a lot from this five-year journey. I want to take what I’ve learned to drive far more change in far less time. I hope this story will help you do the same.