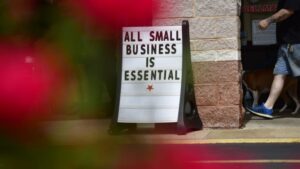 As a follow up to the OpEds we published in CNBC back in April (To save the US economy, policymakers need to understand small business 101 and Stampede for emergency loans is crushing lenders, putting millions of small businesses at risk), Elizabeth MacBride and I published a third piece today, Communities across America rush to save Main Street as federal relief for small business stalls. In it we talk about the continued failure of the federal government to help small businesses and highlight some encouraging ways that local communities have stepped into the void to help. It’s inspiring but not surprising to see people across the US step up to help businesses stay afloat.

I’m disappointed that the Senate stepped away from their negotiations around the additional relief bill. It’s become clear that millions of small businesses have already closed or are just hanging on by a thread. We need to do more to support them and it appears the government is shifting that burden of effort to our local communities which are already stretched too thin.  Amongst other things, the OpEd highlights an innovative fund that Colorado has set up to support small businesses, the Energize Colorado Gap Fund. I’m really proud of the work that my partner, Brad Feld, along with Wendy Lea, Mark Nager, and others have done to inject resources into the struggling small businesses in Colorado. But to be clear, those resources should have been supplemental to the support the government was providing to grassroots entrepreneurs. Without the Senate doing the hard work of finding a middle-ground, we’re leaving a majority of our country’s small businesses twisting in the wind. Many of them will not survive until after election day when it’s most likely the Senate will look at passing the next large relief package. I’m hopeful that some additional pressure from constituents will make a difference.

Op-ed: Communities across America rush to save Main Street as federal relief for small business stalls

Last week, the U.S. Senate gave up the fight to save America’s small businesses. They walked away from negotiations that would have extended a lifeline to grass roots entrepreneurs on the front lines of one of the worst economic catastrophes in U.S. history.

But from Colorado to Ohio to Virginia, we have seen communities across the country stepping up where the federal government has failed. As we’ve been researching an upcoming book about the future of entrepreneurship, we have found cities dipping deep into strained budgets, turning to new technological solutions and coming together in creative ways to save their local businesses, lending hands and providing investment dollars to struggling businesses in their communities.

Communities are leading where the Trump administration is failing and as election-year politics freeze Congress into inaction on renewing and simplifying the aid programs passed last spring.

Consider what happened in the small mountain city of Staunton, Virgina. On Aug. 8, a storm cell stalled there, dumping five inches of rain in an hour and 40 minutes. Rivers ran through the downtown, four feet high. Cars went through windows, according to Debbie Irwin, the director of the Staunton Community Creative Fund, an entrepreneurship support organization.

At least 50 small businesses flooded. This after six months of a pandemic assault that has devastated businesses and dragged revenue down by as much as 70% to 80% across this community. The morning of the flood, Irwin started messaging Greg Bean, executive director of the Staunton Downtown Development Association. “What can we do,” she texted.

Within hours, they had organized hundreds of volunteers to carry trash and scoop mud from the storefronts and restaurant floors. Their GoFundMe page, set with a $20,000 goal, surpassed $100,000 within four hours.

“We’ve been relying on the grit and resilience of small business owners,” said Irwin. “I don’t know how much more we can expect from them.”

Even as communities such as Staunton act, they know it won’t be enough.

An economic catastrophe in the making

The probable loss of millions of small businesses over the next six months is an economic catastrophe of historic magnitude. America is home to a lot of big companies that dominate the headlines, mindshare and financial markets of our country. But the real story of American business has always been about small.

Small businesses create two-thirds of net new jobs and are the driving force behind U.S. innovation and competitiveness,” says the SBA, which tracks business trends for the U.S. government. Small businesses accounted for 44% of all economic activity in the United States and were responsible for $5.9 trillion in GDP in 2014, the last year for which data are available.

Small business closures will instantly swell unemployment numbers and put further strain on localities’ budgets. Small business is a broad term and includes an array of companies across the country, and there are some who haven’t been affected or that have benefitted from the pandemic. But what you might think of as “grassroots entrepreneurs” represent by far the greatest number: Restaurants, hair salons, local shops and markets. They’re getting clobbered, and it’s going to get worse as we move from summer into fall and winter and the weather deteriorates.

Some 400 miles away from Staunton, trying to stave off the catastrophe, the city of Akron, Ohio, has given out more than $5 million in direct grants through the CARES Act. More than 90% of the 13,262 employers in Akron in 2018 had fewer than 50 employees, employing as many as 160,000 people. Those establishments likely include some larger restaurants that survived the first wave of the pandemic, but might not survive the winter.

“To permanently lose 20% to 30% of them would be catastrophic,” said James Hardy, the deputy mayor for integrated development by email. “Particularly when you consider that Akron had only recently ‘recovered’ from the Great Recession. Meaning we had returned to pre-recession job numbers.”

Even worse is what happens to the employees. “It would be a gut punch to thousands of local residents and entrepreneurs. One that could send them and their families back for a generation,” Hardy said. “60% of Akron residents live paycheck to paycheck or worse. We know from this and other research that Black and female workers and business owners will continue to be hit the hardest.”

The city is now experimenting with a new app — the city’s version is called Akronite — to promote small businesses and to encourage residents to shop locally. About 2,600 people have signed up so far.

Akron is spending more than $200,000 on the app over two years. Akronites spend money in small businesses to earn “blimpies” (think Goodyear) and redeem the rewards for cash at small businesses.

Hardy expects the investment in the app to pay off in terms of higher spending at local businesses. But the biggest benefit: The small business owners will feel that somebody cares. “They’re scared and frustrated,” he said.

So is he. “I’m choosing my words carefully,” he said. “There is a lack of leadership in Washington, D.C.”

A handful of communities are helping small businesses that are willing to sell equity in their companies through local investing platforms, including MainVest, outside Boston, LocalStake, based in Indiana, and Milk Money, based in Vermont. Investors can buy into local businesses for as little as $100, based on business or expansion plans.

But the most important thing communities can do for small businesses now is find some way to get them cold hard cash until there’s a real end to the pandemic. The support can come in the form of grants or – less preferable – low-interest loans and other forms of support to help rebuild their businesses.

When the federal aid programs ended July 31, many localities stepped up to offer support. The city of Staunton, for instance, offered $12,500 grants. Augusta County, Virginia, also offered assistance to its local businesses. Many communities have been taking some of the money from their own CARES Act allocations and instead repurposing it to support businesses in their communities instead, according to Lewis.

But that money is quickly depleted. In Colorado, an innovative statewide loan program called The Gap Fund began offering grants and loans to Colorado businesses with fewer than 25 employees. Launched with $25 million raised from public and private sources, the fund received almost 1,500 applications in its first 24 hours. The average funding request was $24,000. It’s a great start, but clearly the need is many times the capacity of its current resources.

“The most important thing communities can do for small businesses now is find some way to get them cold hard cash until there’s a real end to the pandemic. The support can come in the form of grants or – less preferable – low-interest loans and other forms of support to help rebuild their businesses.”

Back in Staunton, nearly 90% of the businesses affected by flooding in August have re-opened their doors, Irwin said. A handful of businesses have closed since the pandemic started, including a loved bookstore, and two restaurants. “We’re going to lose more,” she said.

In Staunton, small businesses are the heart of the small city and they are the gathering places and the vehicles for people to connect. “We are Zoomed out. We are technolog-ied out,” Irwin said. “During the flood, you saw what happens when people prioritize community over their own interests.”

America’s losses will be incalculable if the next six months go as we expect them to. One recently released working paper by economist Robert Fairlie suggested that the number of businesses in the United States fell by 22% — 3.3 million businesses — between February and April of this year. Not surprisingly, this was the largest drop ever recorded. And that was just in the initial months of the pandemic. We’re bracing for a fall surge that could devastate America.

Our leaders can learn something from what’s taking place in communities across our country. Citizens are stepping up to save their Main Streets because they understand how important our local businesses are to the fabric of America. It’s time for Republicans and Democrats in Congress to put aside their differences and act.