Quick note: I’m not your lawyer. I’m not giving legal advice in this post.

Back in the olden days of venture capital, company boards had wide discretion in pricing company options. As is true today, there was a requirement that options be priced at or above the “fair market value” of the underlying stock (otherwise there would be tax consequences to the optionee and sometimes to the company as well). However the board could determine what that fair market value was and, generally speaking, there wasn’t a practical way that these valuations could be challenged. Most boards did some level of work to determine the FMV of a company’s stock but generally options were priced between 10% and 15% of a company’s then preferred price (because common equity sits behind preferred equity there is typically a discount applied to the FMV of common stock to account for this “overhang”). It was and is imprecise science but – at least in the case of venture backed startups – there wasn’t much harm in an option being priced low. It was a benefit to employees and a slight value transfer from equity holders to option holders (generally speaking in M&A transactions the value of the aggregate option exercise ends up allocated across the rest of the cap table). In a funny way it also benefitted the IRS in terms of tax collections as employees were taxed on the spread between the option and the value of the stock on exit and since these shares were typically exercised at the time of an exit were subject to short term capital gains. Higher strike prices distributes proceeds away from short term gain tax to equity holders who more typically are paying long term gains on the value that was shifted (I’m skipping a huge amount of nuance and detail here but the above is a general representation of how things work).

This all changed on January 1, 2005 when the IRS proposed new rules for the treatment of deferred compensation, including employee stock options (here’s the initial announcement; the code section was finalized in April 2007 – side note, there was a ridiculous interim period when the rules had been proposed but were incomplete and subject to final comment and approval; during that time companies were still expected to comply with the new rules, however the IRS conveniently only gave us until 12/31/05 – almost 18 months before the rules were finalized – to get it all right). Code Section 409A covered a lot of ground related to deferred compensation (and was generally thought to be the result of some of Enron’s business practices, although I think the IRS had in mind a number of different ways companies were structuring deferred comp arrangements that they felt underpriced the market and therefore resulted in immediate – but untaxed – gain to employees).

For startups it meant that for all practical purposes companies would have to hire an outside valuation firm to conduct a 3rd party, arm’s length analysis of the fair market value of a company’s common stock (boards were still free to make their own determination but doing so involved risks that effectively all professional investors determined were too great to take on). Over night a cottage industry was created to conduct these valuations. At the time, the cost of each of these valuations ran between $10,000 and $15,000 annually for each company. These costs have come down a lot since then, and the rules have been tweaked a bit but the overall 409A framework still is as it was when originally adopted – companies must hire a 3rd party to value their stock each year. These reports are generally quite lengthy and not always particularly comprehensible to non-finance professionals. So the rule of thumb is still to consider the FMV of common as a % of the preferred price – at least as a sanity check to the larger valuation exercise.

So what should this discount be? I thought it would be worth taking a look at the data across the Foundry portfolio. A number of factors go into the calculation and I assumed that the FMV of common as a % of preferred would vary both by company stage and by the time between the valuation and the last financing round. Specifically I assumed that the longer period of time between a financing and the valuation, the less the gap would be between preferred and common. Similarly I assumed that later stage companies would also show a smaller gap. I was wrong. From the data we collected, there was relatively little variance between company stage or time to last financing and 409A discount to common. There’s a little noise in a few spots in the data (due to small numbers of samples in certain categories) but the numbers were pretty concentrated around the average of 36% of the last preferred round no matter how you slice it. So 30%-40% is the range. Interesting… 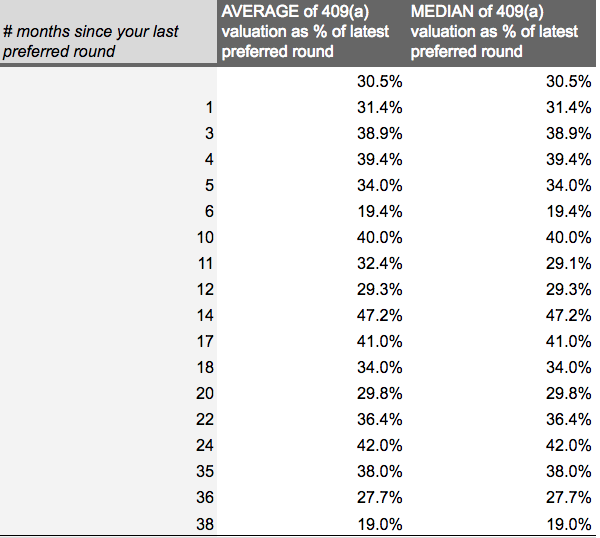