Those that have followed my blog for any period of time know that I love the data that my friends at Correlation Ventures gather and write about (for example the data behind my post Venture Outcomes are Even More Skewed Than You Think or IPO or M&A). Today they released some data on the correlation between the number of venture board members around the boardroom table and the success of venture funded businesses which I thought was pretty illuminating and which confirmed a long held suspicion of mine.

I haven’t counted exactly but I’ve been on dozens and dozens of venture funded boards in the almost 20 years I’ve been a venture investor. Some have been fantastic. Some have been dysfunctional. Most have been somewhere in between. I’ve had the experience of being the sole venture board member. I’ve also been on boards as large as 15 or more when you include not just the board members but also the board observers, associates and others that regularly attend board meetings. I’ve often wondered what the optimal number of venture board members is and have regularly cautioned CEOs and founders against adding too many; and especially adding too many too early in the life of a company.

Today, Correlation answered this question empirically in a fantastic analysis that plots the correlation between the number of VC board members and the ultimate success of a business. They’ve controlled for factors beyond this variable and from their analysis we can draw pretty clear conclusions about how many board members is too many. 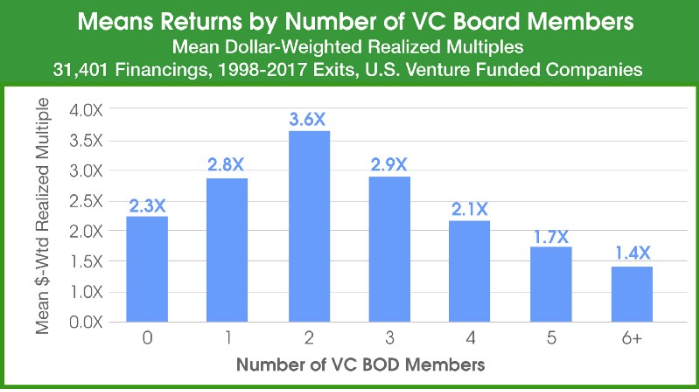 There’s plenty to talk about here, but the shape of the graph pretty much tells the story. There’s value to having VCs on your board. In fact, there’s value (or at least a correlation with success) to having multiple VCs on your board. But this value diminishes – and does so rapidly – as you add too many. This certainly matches to my experience. It’s almost always helpful to have a few experienced investment voices around the table. But having too many becomes hard to manage and leads not just to conflicting advice, but I’d suspect to CEOs and management teams spending too much of their time on board management and not enough on the business itself. It’s important to note here that the skew on the right tail of this graph was not due to investment stage (which was my first thought when I saw the graph) – Correlation controlled for that, as well as sector, time period, etc. and found that the correlation holds – companies with more than 3 investor board members performed worse than those with 3 or fewer.

I think it’s important to point out here that, at least in my experience, that having too many VCs around the table is bad for companies even if those VCs are good, helpful, competent people. I say this not just for the benefit of my peers who are reading this and with whom I sit on a board with more than 3 venture investors. I say it because I’m trying to emphasize that different board members bring different skill sets to a company and a board. And while VCs certainly come from many different backgrounds, I think the real issue here is that their skill set and points of view are over quite overlapping. They also tend to have a very loud voice in a board room because, despite being fiduciaries of all shareholders, they also represent typically the largest owners (and funders) of a business. Better boards are more diversified. Actually I said that backwards – more diversified boards are better boards. The research clearly shows this. This is true across all types of diversity (background, experience, gender, race, etc.) and ultimately having too much of a concentration of VCs on your board is a type of lack of diversity that creates poor boardroom dynamics and negatively effects businesses.

Now you have the data. It may be time to have some hard conversations with your investors…