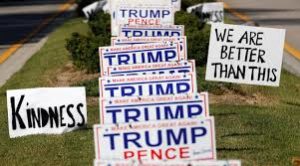 While I’ve been very vocal on my Twitter feed for months about Trump I haven ‘t put up any long form content here about it. Maybe it has just been easier to shout into the Twittersphere than it was to really sit down and talk about the challenges ahead of us. Maybe I wasn’t ready to put it into a format that exceeded 140 characters. And for some time I had hoped that maybe things would moderate and calm down.

They haven’t. And in fact they’re getting worse.

Like I suspect many of you did, I woke up the morning of November 9th pretty upset. I jokingly called it the trifecta of crap: 1) I was tired, having stayed up late watching the election returns; 2) I had too much to drink the night before as the returns rolled in and had a headache; and 3) Donald Trump was our president elect.

My first instinct was to dress in all black and head into mourning. It was a depressing day in my view of America and I was ready to go crawl into a hole. But then I read a few emails from portfolio CEOs concerned about the future. And I saw one of my daughters who was upset both because of Trump and because she thought that meant we were going to have to move (we had jokingly (?) talked about finding a new home for a few years if Trump was to be elected). I paused for a few minutes and thought about both my reaction and the reaction of the world around me and realized that I needed to think about things differently. First I penned a note to our entire portfolio that I shared in a previous post – the note essentially said “let’s take a step back and see how this plays out before we all react”.  Then Greeley and I sat down with our kids and delivered a similar message. We live outside of Boulder and our kids go to a public school one town over that is mixed in terms of background, socioeconomics, religion and politics. We had a good conversation about how some of their friends (and friend’s parents) were going to be happy about Trump’s election and some wouldn’t but that they shouldn’t place value judgements on either – let people react the way they were going to react. I then went and put on my brightest shirt and went off to work trying to muster as much positive energy as I could (tweeted about that here, in fact). I took some heart in knowing that we actually know quite a few people who voted for Trump (all of whom are decent, caring people).

That attitude is no longer working for me, however. Somewhere in the craziness of the first week of Trump, I’ve lost my ability to stay positive. And I feel the need to be clear – in greater than 140 characters – that I think America is on the wrong track. Trump has lost his hold on reality. A president with no popular mandate and a historically small electoral college victory is pandering to the most extreme and hateful elements of our society. His views on issues up and down the policy stack are wrong. They are un-American. They divide us. They make us less safe. People of good conscience MUST speak up. On social media. Everywhere online. In person.

History will judge our actions and words in the face of Trump’s threat to American ideals. Stand up and be counted! There is no middle ground.